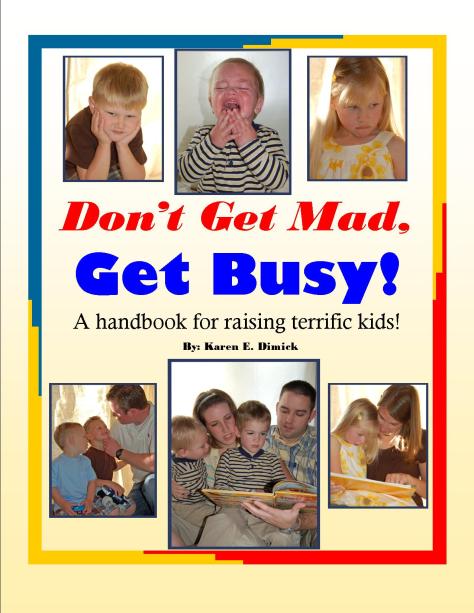 Raising kids was going to be a piece of cake.  I was the oldest of 4 children and spent most of my older childhood and teen years helping with my siblings and babysitting all of the neighborhood children.  My sister and I would watch several families of children at one time and take them on fun outings to the park or the ice cream store.  I studied child development in both high school and college and spent 5 years working as a preschool and kindergarten teacher.  I was also in charge of the after school childcare program at the school where I worked and was viewed by my co-workers as the best at handling the children that no one else could.  Yes, after handling a classroom full of children raising a family would be easy for me.  My husband, who loved kids and was the oldest of a large family, and I determined that we would have 12.  Well, maybe not 12, but at least as many as we could afford and handle.  We would be great parents!

Then my oldest son was born.  He was anything but your typical child.  From the day he was born Baby #1 seemed unhappy with being a baby and wanted to go out and see the world.  He was alert and bright and did everything early.  He rolled over at 3 weeks old, stood in his crib at 5 months and began walking at 6 months, skipping crawling altogether.  By two he had taught himself all of the letters in the alphabet and the sounds they make by watching Sesame Street and by 4 he taught himself to read.  Of course this bright mind and eager body was quite a trial for parents, even parents that were well prepared.  He had endless energy, was always getting into something and seemed to never sleep.  It is a real problem when your child needs less sleep than you do, especially when the child is so busy and energetic that you dare not leave him unattended.  Bedtime was a big problem.  On the average it took our son two hours past when we put him to bed for him to go to sleep.  And this was not a quiet two hours of patiently waiting for sleep to come, this was two hours of getting out of bed, getting into things, running through the house followed by pleadings and threats by my husband and myself for him to stay in bed.

When Baby #1 was two we welcomed Baby #2, a sweet daughter, into our home. Right on her heels Baby #3 came along, when #2 was just 15 months old.  Baby #2 was so different from older brother as a little baby.  She was petite and she actually slept at night and took naps.  She was content to sit in the playpen for part of the day, unlike older brother who wanted to be held constantly.  Not to be outdone by her big brother #2 soon showed that she was not going to be any less of a handful.  She was very busy and had a mind of her own at a very early age.  She seemed to hit the terrible twos at 15 months, just as her sister was born, and she continued to assert her independence and argue with me throughout her life.

After #3’s birth I had to admit I had no idea what parenthood would be like before I actually experienced it.  I thought I could handle it all, but I had no idea what a difference it was to be responsible for your children 24 hours a day, rather than just a few hours.  I couldn’t send these children home to their parents when I had had it; my husband and I were it.  On top of that I had to take care of all the tasks of running a home.  As a teacher I had been responsible for teaching the children.  Here at home I had to cook, clean and do laundry.  In addition to all of that, I had to help my husband support the family financially.  I felt it important to give my children as much of me as possible so I managed to find jobs I could do at home for most of my children’s young years.  With all of the demands on my time the strategies that I had used as a teacher did not apply here because my children were not my only responsibility.

So here I was with a very busy three year old who wanted my attention, a 15 month old who wanted nothing to do with me but wanted to go out and take on the world on her own and a newborn with colic.  Add to that mix three children that I watched to keep my family finances afloat and you can see that to say my life was hectic was an understatement.  I did what anyone would do in a similar situation, I lost my mind.

I knew I was at the breaking point one day when older brother and little sister wanted to play hide-and-go-seek.  The baby was asleep, and I had no extra children at my home, so I decided to take my turn to hide, and I hid in the closet behind the clothes.  It was a really good hiding place and they couldn’t find me.  After sitting there for a while I found I loved the cool, quiet solitude of being in the closet behind those clothes.  I knew the kids were okay because I could hear them looking for me, but they weren’t demanding anything of me.  I was congratulating myself on finding a way to get some peace when they started to cry.  “Where’s Mommy?” they sobbed.  It was then that I realized that parenthood was so much more than enduring our children’s lives, or controlling their behavior.  Parenthood is about loving and nurturing our children into adults.  Sure, this was a whole lot different and more demanding than teaching, but it was also so much more rewarding.  I wasn’t going to get a new class next year, my husband and I were responsible for these children into adulthood, and we would be their parents forever.  I needed to find a way to shape and mold these strong personalities into responsible adults.

When children don’t behave our first reaction is to get mad.  But getting mad doesn’t help.  Years ago parents knew how to handle their children.  The prevailing wisdom was that if you spare the rod you would spoil the child.  So when many of today’s grandparents were children they felt the swift and firm consequence of their behavior with physical punishment.  Most experts now agree that strong physical punishment is neither advisable nor effective.  The problem is that today’s parents have not been given tools that are as swift, firm, speedy and as easy to execute, as a whipping was.  We have been told to use time out or to ground our children, but many parents have found time-out to be less than effective and have found that when they ground their child they ground themselves as well.

After that day in the closet I set out to come up with concrete systems that I could use to shape my children’s behavior with love, but firmness.  I used my experience as a teacher and knowledge of child development and human behavior, as well as trial and error, to develop positive and negative reward systems and record keeping charts to help and guide me.  Many of the systems I developed were developed with the needs of a specific child in mind, but I found that they often worked for everyone.

Nearly 20 years have passed since that day in the closet, and a lot has taken place.  Baby #1 grew into a wonderful boy and young man, and is now a father himself, with an outstanding mind, but with many obstacles to overcome.  He was diagnosed as having Attention Deficit Disorder, dysgraphia (a writing handicap) and a visual processing disorder, which brought many years of struggle through school.  One daughter was diagnosed with Attention Deficit Hyperactivity Disorder, Oppositional Defiant Disorder (which I describe as acting like a teenage for life, and yes, it is a real disorder) and being at risk for depression.  As she grew she was a master at making trouble with her best friend and sister and really had trouble being successful in school.  But now she is a beautiful college graduate with many talents and a knack for doing anything she puts her mind to.  Baby #3’s colic lasted for 6 months, even though all the baby books claimed it only lasted for 4, but when she quit crying we found that she was a happy, delightful, bright little girl.  She is, however, extremely demanding and driven.  She is the princess and I often thought she would have made a good only child, but somehow she was placed in the middle of 5 kids.  She seemed to resent all the extra time I had to spend helping her older siblings get through school and raising her little brother and sister, but she continues to be bright and bubbly and is an outstanding, driven and successful teacher and college student.

After 3 kids in 3 ½ years we took a four year break before bringing #4 and #5 into the world.  They proved to be surprisingly “normal”, although they, as do all children, have had their trials.  I found that many of the strategies that I had developed for my difficult children worked very well with them.  I also have had an opportunity to further use and refine many of the techniques in my job as a middle school teacher.  As I raised my children I had several opportunities to continue my work as a preschool teacher both through a home child care program and employed at various schools that allowed me to bring one or more of my children with me.  When my youngest went to school full time I was able to continue my education and seek employment in public education.  I now work as a Resource Specialist and work with middle school-aged children with disabilities of all types and severities.  Many of the techniques and charts I developed for my own children I have been able to adapt for use in the classroom and I have shared with parents.  These techniques have proven to be useful to help children with various disabilities control their behavior both in the classroom and in their homes.

Some people say my husband and I are nuts to have 5 children.  We may be because it is the hardest thing I have ever done, but raising them has brought me more joy and satisfaction than anything else.  Whether you have one child or ten it is a lot of work to raise children.  Kids may do things that will make you feel extremely mad, but getting mad will not shape and guide your children correctly.  Good hard work, a plan on how to proceed and some good tools will.  So look through the suggestions and guidelines in this book then try out some of the tools and choose the ones that will work for you.  Then, don’t get mad, get busy!

One thought on “Raising kids is a lot of work!”

Thoughts and Musings of Karen Dimick